To strive for and maintain unity in the family, community, nation, and race. 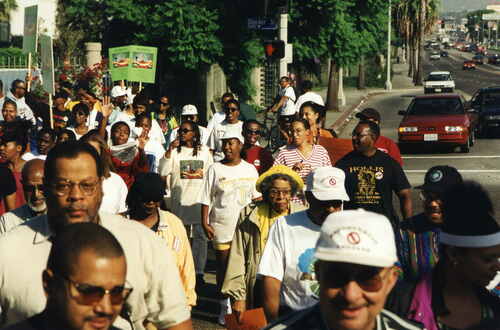 Umoja (Unity) is the first and foundational principle of the Nguzo Saba. Unity is both a principle and practice of togetherness in all things good and of mutual benefit...

Unity as a principle and practice begins with family. Adults and children must respect and approach unity as a moral principle of family and community, not simply a political slogan... 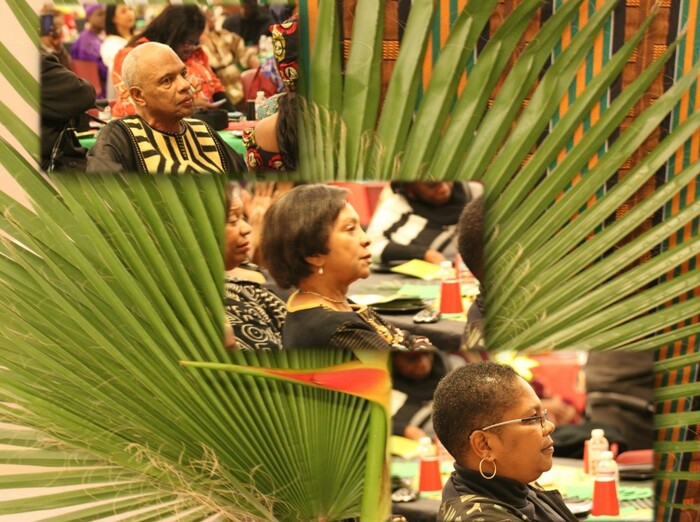 Finally the family must be, as in African culture, the focal point of unity not simply of siblings and of genders, but also of generations...

If one starts with the family when discussing unity, the community (local and national) becomes the next level of the concern and the practice of unity... 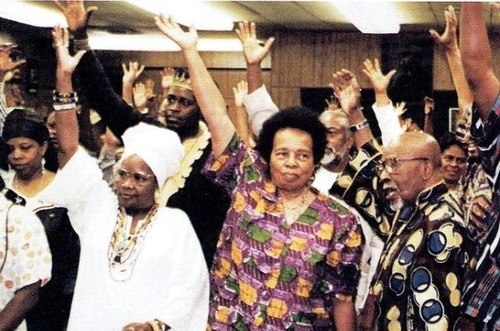 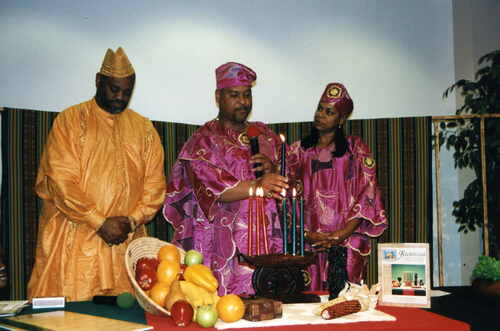 The ultimate level of unity for African people in Pan-African unity or unity of the world African community. This is also called Unity of the race...


Umoja (Unity) is the first and foundational principle of the Nguzo Saba for without it, all the other principles suffer. Unity is both a principle and practice of togetherness in all things, good and of mutual benet, It is a principled and harmonious togetherness, not simply a being together. This is why value-rootedness is so important, even indispensable. Unity as principled and harmonious togetherness is a cardinal virtue of both classical and general African societies. In ancient Egypt, harmony was a cardinal virtue of Maa, i.e., righteousness, rightness. In fact, one of the ways to translate Maat is to define it as harmony—harmony on the natural, cosmic and social level. Likewise, Cieng among the Dinka, means both morality and harmonious living together. Thus in both ancient Egyptian and Dinka society, one cannot live a moral life without living in harmony with other members of the community.

If unity is in essence a principle, it is no less a practice as are all the other principles. For practice is central to African ethics and all claims to ethical living and commitment to moral principles are tested and proved or disproved in relations with others. Relations, then, are the hinge on which morality turns, the ground on which it rises or falls. In this regard, we can refer back to the discussion on character development through ethical instruction. Character development is not simply to create a good person abstracted from community, but rather a person in positive interaction, a person whose quality of relations with others is defined first of all by a principled and harmonious togetherness, i.e., a real and practiced unity.

Another way of discussing unity is to see it as active solidarity. This essentially means a firm dependable togetherness that is born, based and sustained in action. It is usually applied to groups, organizations, classes, peoples and expresses itself as building and acting together in mutual benefit. The key here is again practice. In the end practice proves everything. No matter how many books one reads on swimming, sooner or later s/he must get into the water and swim. This may be called, on this level, the priority of practice. Finally, unity means a oneness, a similarity and sameness that gives us an identity as a people, an African people. And inherent in this identity as a people is the ethical and political imperative to self-consciously unite in order to define, defend and develop our interests.


Unity as principle and practice begins in the family but presupposes value-orientation of each member. Adults and children must respect and approach unity as a moral principle of family and community not simply a political slogan. As principle and practice, this means principled and harmonious living with brothers and sisters, mothers and fathers—sharing and acting in unison. It means avoidance of conflict and quick, willing and principled resolution when it occurs. It means a yielding and gentleness of exchange as taught in the Sacred Husia.35 The family must reject harshness and practice gentleness, stress cooperation and avoid conflict, and be very attentive to things that would divide or create differences negative to togetherness.

Especially important is the unity of the father and mother, for they are the models for the children and the foundation for the family in every sense of the word. Here the African concept of complementarity of male and female as distinct from and opposed to the concept of conflict of the genders is instructive and of value. As Anna J. Cooper, educator and social theorist, taught "there is a feminine as well as masculine side to truth (and) these are related not as inferior and superior, not as better or worse, not as weaker or stronger, but as complements—complements in one necessary and symmetric whole. "36 The recognition of this truth and responding creatively to it is necessary, she says, to give balance to the person and to save the nation from its extremes. It also is a shield against sexism, i.e., the social practice of using gender to establish and/or justify exploitation, oppression or unequal relations.

In African complementarity, three principles internal to it are necessary and reinforcing of both the concept and practice: 1) equality; 2) reciprocity; and 3) friendship. One starts from the assumption of human equality and cultivates social equality as its logical and necessary complement. Reciprocity among equals is morally and socially compelling. And friendship is the fruit and expected outcome of a mutually-respectful and mutually-beneficial relationship which is tested and tempered through time and is rooted in mutual investment in each other's happiness, well-being and development.


Finally the family must be, as in African culture, the focal point of unity not simply of siblings and of genders, but also of generations. One of the most important expressions of family unity is the respect and collective concern and care for the elders. Respect for elders as Amadi points out is a "cardinal article of the code of behavior" of African society.37 One who does not respect his/her elders is seen as immoral and uncultured. Elders are respected, like the ancestors they will become, for their long life of service to the community, for their achievement, for providing an ethical model and for the richness of their experience and the wisdom this has produced. Thus, elders are seen as judges and reconcilers. It is they who hear cases of conflict and problems and offer solutions. One of the most important aspects of African respect for elders is that it makes them useful and active in the community, unlike the worst of European society which deprives them of meaningful roles and places them to the side, leaving them with only failing memories.

Also, the active participation and involvement of elders in the daily life of the family not only benefits them but the younger people. For it teaches them to understand and appreciate the process of growing old, gives them access to seasoned knowledge and experience and helps prevent the so-called generation gap so evident and advertised in European society. Key to this linking of young and old is the concept of lineage which links all the living, the departed and the yet unborn. This is translated in practice into the extended family and the protocol, ritual, reciprocity and remembrance this involves and requires. Early in life continental African children are taught to memorize and recite their family tree as far back as any ancestor is known. This keeps historical memory alive and reaffirms respect for those living and departed who contributed to their coming into being and cultural molding.


Now, if one starts with the family when discussing unity, the community (local and national) becomes of necessity the next level of the concern and practice of unity. The family, as it is written, is the smallest example of how the nation (or national community) works. For the relations, values and practice one has in the family are a reflection and evidence of what one will find in the community. Unity begins in the family but it extends to organizational affiliation and then the unity of organizations, i.e., African American united fronts. Malcolm X taught that community unity first depended on everyone's belonging to an organization, then all organizations uniting on the basis of common interests and aspirations. He posed community unity, in its two-level form, as morally compelling. It was for him irresponsible and self-destructive not to unite around common interests and instead glory in differences. What African Americans needed to do, he taught, is to forget their superficial organizational differences and even differences of religion and unite around their common identity as Africans, and their common interests, especially the interests of liberation .38


The ultimate level of unity for African people is Pan-African unity or unity of the world African community. This is also called unity of the race. Thus, when Garvey says, "Up you mighty race; you can accomplish what you will," he is talking to the world African community. The form of unity this takes is Pan-Africanism, i.e., the struggle to unite all Africans everywhere around common interests and make African cultural and political presence on the world stage both powerful and permanent. Pan-Africanism requires and urges that we see ourselves and act in history as an African people, belonging to a world community of African peoples. In this way, we self-consciously share in both the glory and burden of our history. And in that knowledge and context act to honor, preserve and expand that history in the struggle for liberation and ever higher levels of human life.

Return
BACK TO THE TOP OF THE PAGE